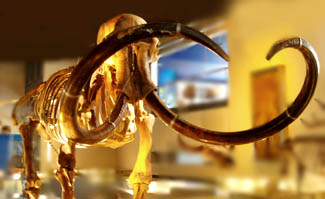 Emerging 55 million years ago, the group of mammals called Proboscideans are identified by the presence of tusks and a trunk and include mammoths, mastodons and elephants.  The oldest mammoth remains have placed the beginnings of the beasts in Africa but eventually, they migrated to Europe and Asia.  Around 1.7 million years ago, the Ancestral mammoth began reaching North America and later evolved into the Columbian mammoth, otherwise known as the American mammoth.

Woolly mammoths (Mammuthus primigenius) were first recorded in Eurasian deposits of the second to the last Ice Age, approximately 150,000 years ago.  Woolly mammoths descended from the Steppe mammoths (Mammuthus trogontherii).  Over time, the cheek teeth of Woolly mammoths evolved into a design of more numerous and tightly arranged enamel plates with less thickness.  A mammoth has four teeth in its skull, two uppers (one on each side) and two lowers.  Over the course of the life of the animal, six sets of teeth will grow, a worn set being pushed forward and out to make room for a new and unworn set.

Preserved carcasses have been found in frozen tundra which allows us to know what the heavy coat of the Woolly mammoth was like.  Their fur was similar to that of the musk ox, consisting of long, dark hairs and fine under wool, with dark-gray skin and an insulating fat layer.  It is most likely that Woolly mammoths molted in summer like Musk oxen.  Another prominent feature of the Woolly mammoth was a high-domed skull with high-peaked shoulders resulting from the long spines of the neck vertebrae likely to anchor a large fat deposit. 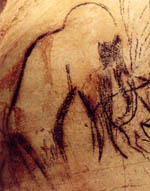 Many Woolly mammoths have been found with large, elaborately curved tusks.  Both the males and females possessed tusks, but the females’ tusks were smaller.  Tusks began to form at birth and continued growing throughout life, adding about a 1/4  inch a year in thickness as they grew.  The undersides of Woolly mammoth tusks often show wear, suggesting that they were used in scraping snow and ice off ground cover vegetation during feeding.  Woolly mammoths also use their tusks for protection against predators, attraction during mating and as a display of dominance to other Woolly mammoths.

In the latter years of the last Ice Age, the Woolly mammoth co-existed with humans such as the Neanderthal and the Cro-Magnon people.  Prehistoric cave paintings in France and Spain have been found with images of the Woolly mammoth including hunting scenes.  Throughout world regions where Woolly mammoths existed at the same times as humans, kill sites have been discovered where mammoth carcasses had been butchered.  At these sites, scientists have found both  stone tools and mammoth bones displaying gashes and cuts,  evidence of cutting and scraping by humans using these stone tools.

Woolly mammoth fossils have been found in northern regions of North America, Eurasia and Europe.

- Images of the Woolly Mammoth skeleton were taken at the  Naturalis Biodiversity Center, Holland