NOTE:  THIS IS THE SMALLEST AND LAST OF THE BABY WOOLLY MAMMOTH TUSKS WE HAVE FOR SALE.

In all our years of work in paleontology as well as cooperative work with numerous museums abroad, this is THE SMALLEST COMPLETE AND INTACT Woolly Mammoth tusk we have ever seen.  It was recently de-accessioned from a large private museum and in that collection of extensive juvenile mammoth material, this tusk was THE SMALLEST specimen, representing two generations of collecting.  This tusk is more rare than a massive tusk.  Tusks this size of the Woolly Mammoth are RARELY found due to their fragile nature not being able to survive the elements of time.  This one of the smallest specimen we have ever seen, from a Woolly Mammoth baby whose skull would not have been any larger than a watermelon.  The photo below is of a skull that is that size and you can see the tusks are even larger than this tusk!  Finding medium size tusks from adults in European deposits are one thing but to locate a tusk from such a small baby mammoth like this happens only once in a lifetime of collecting - ESPECIALLY COMING FROM EUROPEAN DEPOSITS.  This tusk is complete with the full back end displaying a cup-shaped cavity showing a still forming base.  We have had small tusks in the past but never this size and never this quality - it is 100% INTACT, UNBROKEN has NO REPAIR OR RESTORATION.  Only a clear sealer has been put on the tusk to  strengthen its condition for safe handling and preserve its rare condition.  The color is a beautiful milk chocolate brown tone with contrasting dark brown natural surface grain.  RARER THAN A 12 FOOT TUSK!  An incredible piece and without question, THE BEST BABY CALF TUSK WE WILL EVER OFFER.

WOOLLY MAMMOTH TUSKS are one of the most popular large display fossils of any collection.  Even the casual observer recognizes this type of fossil and the value and appreciation of a COMPLETE fossil ivory tusk from the great Woolly Mammoth has garnered international appeal and awe.  The famous Wooly mammoth can be considered the mascot animal of the Earth's final Ice Age and this massive beast most certainly gained respect to all that got in its way including both Neanderthals and modern humans.    The lore of Cave Paintings and Neanderthal hunting parties are embodied in the magnificence and power of a genuine fossil mammoth tusk of Europe's final Ice Age where the Woolly Mammoth ruled the frozen tundra. 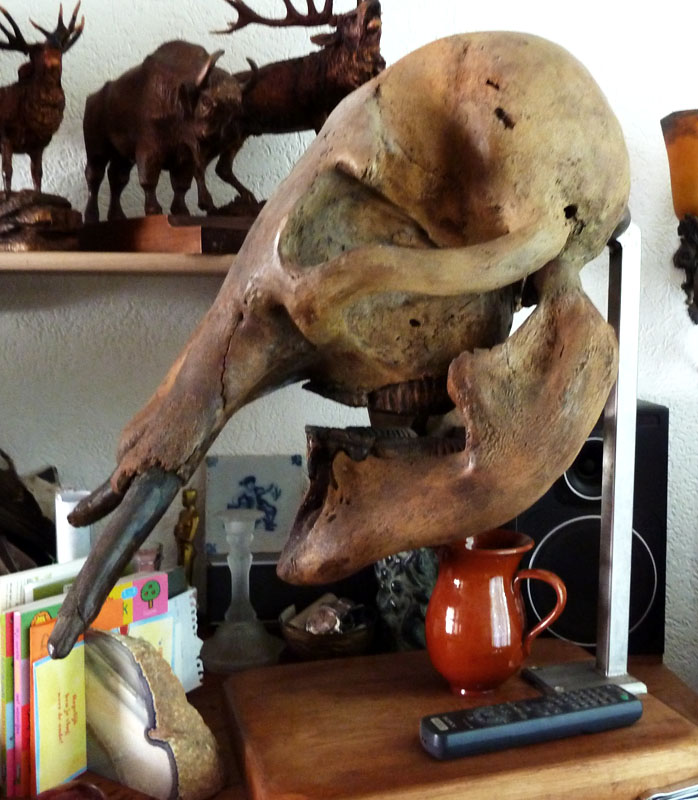 THE ABOVE SKULL IS OF A VERY YOUNG BABY WOOLLY MAMMOTH CALF AND THE TUSK WE OFFER HERE WOULD HAVE COME FROM A MAMMOTH EVEN SMALLER THAN THIS!