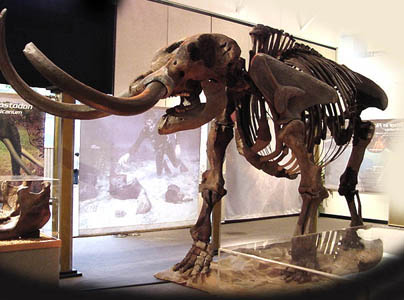 Emerging 55 million years ago, the group of mammals called Proboscideans are identified by the presence of tusks and a trunk and comprise three families: Mammutidae, Gomphotheriidae and Elephantidae.  Because Mammoths such as the Imperial or Woolly Mammoth are different than Mastodons, they are included in the Elephantidae.  The family Mammutidae which includes all Mastodons, represents one of two of the oldest known proboscideans first dating back to the Early Miocene with the species  Eozygodon morotoensis.  The American Mastodon, Mastodon americanum, became extinct 10,000 years ago joining the demise of most other prehistoric proboscideans.  The last surviving mastodon was the American mastodon.  All that has survived today are the proboscideans from the family Elephantidae which are Elephas and Loxodonta.

When standing aside a mammoth, the mastodon looks just like a Neanderthal version of the proboscideans.  The body form is shorter, more stout and robust and lends itself to a much more muscular physique in contrast to the more graceful and taller mammoth.  Mastodons had a pair up upward curving main tusks and some had a much smaller set of straight rod-like lower tusks.  In some species, the lower tusks fell out as the animal grew in years. 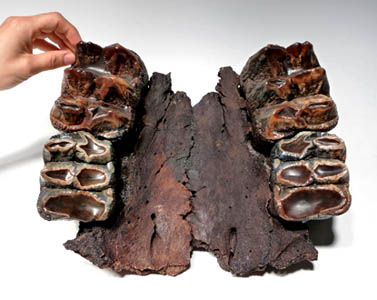 The cheek teeth of mastodons are also more primitive with sharp crests and a dramatic lobed surface in unworn examples compared to the flat and fine ridged surface of mammoth teeth that resemble the sole of a boating sneaker.  This type of tooth of the Mastodon is called  zygolophodont.  These differences tell us about the types of food that both types of creatures ate.   The mastodon was more suited for forest environments with teeth that were well adapted for chewing tougher vegetation like twigs, leaves, shrubs, fruits, pine cones, pine needles and mosses.  The mammoth with its smoother teeth, was best suited for the open plains feeding on a variety of grasses.

Mastodon fossils have been found in  Africa, Europe, North America and in the Mediterranean.