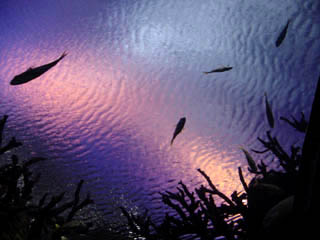 The oceans are believed to be more than 4 billion years old.  They were home to the very first known form of life on our planet 3.5 billion years ago, blue-green algae.  Invertebrate (without a spine) life forms thrived in these ancient seas and eventually exploded into dramatic diversity in the Devonian Period, nearly 400 million years ago but something else happened around 100 million years earlier than the Devonian that forever changed life on Earth.  It was the emergence of creatures with a backbone - VERTEBRATES.

The very first vertebrates on our planet were fish.  Initially, these were jawless fishes called agnathans and the earliest examples are known to date back to the Ordovician Period 500 million years ago.  Later, the first jawed fishes emerged and were similar in appearance with heavily armored heads and cartilaginous internal skeletons but were equipped with strong crushing jaws.  These were the placoderms and some species like the Dunkleosteus grew to frighteningly large proportions.

It was also at this time, over 400 million years ago, that sharks and rays  (chondrichthyans) appeared with the placoderms.  Like the agnathans and placoderms, chondrichthyans had internal skeletons made up entirely of cartilage.  The first fish to have complete skeletons made of bone arrived much later at 200 million years ago.  These are known as the bony fishes or osteichthyans.

Except for placoderms, all major groups of fish still survive today.  More primitive groups are such as the lampreys and hagfish are much more limited in variety than they were millions of years ago.  The bony fishes are the most prevalent still in existence.

Fish are the most abundant of all living vertebrates and make up slightly more than half of the approximately 48,500 described species with us today!  With the longest period of existence known of all vertebrates on our planet, it is no wonder that fish are so diverse.  It is impossible  to accurately quantify the number of species of fish that have lived since their beginning but based on known rates of evolution and emergence of new species over the entire fossil record, it is most likely in the MILLIONS!  Despite their proliferation, fish are relatively rare as fossils.  Aside from shark's teeth with their near indestructible durability, the fragile nature of a fish body makes it a poor candidate for fossilization.

Nevertheless, there are some unique environments and circumstances that existed in prehistory where some deposits in the world produce the most impressive and perfectly preserved fossils known to science.  With the most minute details retained in the host rock, these spectacular fish fossils offer a rare glimpse into life that existed hundreds of millions of years before the first human walked out planet.  Most fish fossils are found in layered deposits whereby the fossil-bearing rock can be split to reveal the preserved remains.  Other fossil deposits in the world yield isolated remains such as scales, teeth and fragmentary bones.  Analysis of the type of fish found in fossil deposits can tell scientist much about the type of water environment they once thrived in.  Characteristics of the fish can reveal if there underwater environment was turbid or placid, deep or shallow or salt or freshwater.  The abundance of fish also usually leads to other fossils being discovered in the same deposit - those of the creatures that fed off them.